The Rewards of Immersing Yourself 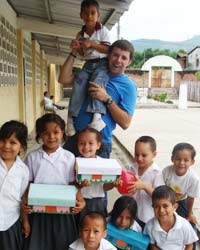 After months of living and teaching in an Ecuador village, Kendall has one, very specific bit of advice for potential volunteers: become part of the community. Make yourself talk to people, even if at first it’s awkward. Establish contacts and friendships. “That’s something a lot of people in my village noticed,” Kendall recalls, “That some volunteers sort of stay to themselves. It could be shyness, or a language barrier. But I would say, you really need to reach out to the people. ”

This was Kendall’s first international venture, and yes, he was a bit nervous when he got there.  Finding himself immersed in Ecuador pushed the boundaries of his high school-learned Spanish.  Like many novice travelers, he worried a bit about the food. His host mother, whom he liked immediately, left for work early and was often out of the house. Judging by Kendall’s calm, measured speech, you get the sense he’s someone who appreciates order and structure – qualities often in short supply in the developing world. For some newly-arrived international volunteers, this could be a recipe for a bummer experience; for Kendall, it was the beginning of the adventure of a lifetime. 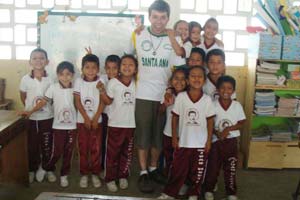 “Life is a lot slower in Ecuador,” Kendall says, “and I quickly realized the importance of family and community. So I also slowed down in a way – adjusted my expectations to the local pace.  I also expressed my interest in the local people by talking with them as much as I could.”  The locals responded. Soon, Kendall found himself having at times extensive conversations with villagers who reveled in his openness. Ecuadorians were eager to hear about his life and family back home; he in turn learned about them. He also learned to accept – and embrace – a different pace of life. Time was a little relative (“it’s quite common for people to be late”) and much of it devoted to celebrations of all kinds. “The Ecuadorian people love parties and festivals. There were a lot of holidays during my stay, a lot of very loud parties with firecrackers and a lot of festive noise.”

Kendall’s immersion quickly bore fruit. His Spanish improved rapidly, today Kendall says he’s quite fluent thanks in large measure to the degree he made himself a part of the village.

There were other positive surprises. He discovered he loved the fresh, plain, preservative- and chemical-free cuisine. “It gave me more energy, and I actually felt better, and healthier than I did in the States.” He realized the children he taught English were more responsive when he looked less like ‘Senior Profesor’ and more like an older buddy – so he started dressing a bit more casually for work.  The result was a closer relationship with the kids, and, most likely, more effective classroom interactions. 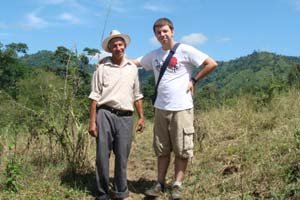 When asked if he’d do anything differently if he had a chance for an Ecuador re-do, Kendall pauses and thinks back. “Maybe I’d make myself get up earlier so I could spend more time with my host mother before she went to work,” he almost chuckles.

Even in retrospect, it’s typical of Kendall to think about his Ecuadorian relationships. He may have an international perspective, but an interpersonal focus.  This quality will serve him well on his next adventure: after graduating, Kendall plans to teach English in Japan. It’s a safe bet that he will emerge from that experience enriched by a vast circle of close Japanese friends.