Maria in Nepal: Rebuilding a Village while Building a Friendship 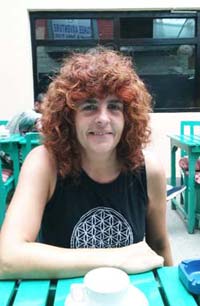 One of ELI’s most popular programs is an effort to help rebuild schools in earthquake-ravaged Himalayan villages. Volunteers arrive for orientation and sightseeing in Kathmandu, then travel -- by bus and on foot -- into remote foothill regions hit hard by the April 2015 quake.

There’s been a lot of international aid pouring into Nepal after the deadly and destructive quake, but it rarely reaches the tiny hamlets in the mountains surrounding the city. This is where ELI’ers can help - and their impact has been impressive. They rebuilt schools, constructed a computer lab and a school library/reading room in small villages where earthquake relief has been almost nonexistent.

Maria, a Spaniard, was and remains part of this effort, and serves as a powerful example of how volunteering can change a life - more than one, in fact.

She first visited Nepal as an ELI’er in September, 2015. This Bilbao native was among the first group of ELI volunteers, mostly from Spain, to travel to Kathmandu after the quake. Much of the city was still damaged; you could see destruction at every turn.

It was even worse in the foothills. In the village where Maria ended up, almost everyone had suffered in some way: their homes were uninhabitable, their few possessions buried under rubble, loved ones perished in the quake.

“Yet when I arrived, everyone was worried about me!” she marvels today. “Whether I was comfortable, or fed. I couldn’t believe how selfless and generous these villagers were.”

Maria and the other volunteers slept in a classroom as they worked on rebuilding the rest of the village school. She remembers loading bricks into a large basket she’d strap to her back, the way the locals do.

Something magical happened in that Himalayan village: the ELI Spaniards fell in love with Nepal, and the Nepalese fell in love with them. Even today, when villagers recall the visiting Spaniards, or when Anish’s staff talks about them, they grin fondly, remembering the easy-going, hard-working, fun-loving volunteers.

For Maria, the experience was deeply personal. She became friends with an impoverished local family, “a family of women,” as she describes them, living in a tiny hut left wobbly by the quake.

“There was the mom, her 18-year old daughter, an auntie and three small children, one of whom was adopted. The family matriarch is in chronic pain from injuries she suffered in the earthquake, which also killed another young family member and her baby.”

In every way, these were people in need, and Maria responded. When she wasn’t helping rebuild the school, she worked alongside the family in the fields where they grew rice, tomatoes and cauliflower, among other edibles. She began to teach the little ones English, sought pain relievers for the mom, and became particularly close to the 18-year old.

When her month-long stay in Nepal ended, Maria vowed to return to “her” village. She could not stop thinking about the gentle, gracious people she befriended there, and true to her word, she was back seven months later.

“ELI gave me the courage to return to Nepal on my own,” she says. “I knew my way around Kathmandu, I knew people here, so I no longer needed the support of going with an organization.”

Anish was thrilled to see her again, and to this day, Maria keeps in touch with the ELI staff.

On her second visit to “her” village, Maria slept in the library reading room she helped build. She brought with her clothing, shoes and much-needed painkillers for “her” family of women. Her family, really: Maria thinks of them as such, and they treat Maria like their own as well.

Maria has now returned to Nepal for the third time, again for a month, in October of 2016. She’d been taking advantage of the free time she’s had since losing her job during Spain’s economic upheavals -- but now she worries when she can return yet again to Nepal.

Still, she’s not short on ideas! Maria is now trying to get a tourist visa for the 18-year old woman she befriended in the village.

“I told her, if she can get a visa, I will pay for her flight to Spain,” she says proudly. They’ve already taken care of the necessary passport, and are now trying to complete the extensive paperwork necessary for a Spanish visa.

“This family has done so much for me, I want to reciprocate. I want to do something really special for them.”

Lives changed by a trip with ELI to Nepal: that’s more than ELI can hope for its customers, most of the time. But when it does happen - it’s nothing short of profound for the ELI staff and its volunteers.