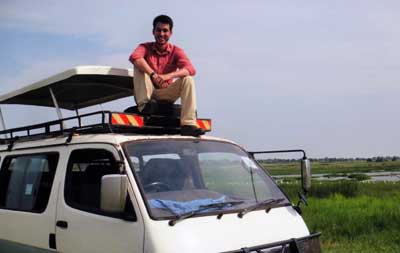 Africa isn’t usually the first destination for international travel newbies. But University of Massachusetts pre-med and public health student William decided that he wanted something different and challenging for his first solo trip overseas. He chose to go to Uganda for 5 weeks as an ELI Abroad hospital volunteer.

“It should have been longer,” William says. “Ideally, I would have wanted to spend three months in Uganda. I had such a great time, I was sorry to leave.”

William prepared for his trip by not over-planning, something he now appreciates.

“I didn’t experience much culture shock because I didn’t have any particular expectations,” he says. “And once I got to Uganda, I tried to go with the flow. So I’d say, the best way to face a Uganda placement is to be open-minded and to arrive without any preconceived notions.”

“Living with locals makes for a richer cultural experience, which is also something I wanted from my trip.”

The host family had six children, and William became particularly close to two of his host mom’s grandsons, one of whom was older, the other younger than William.

“They were all very concerned with my well-being and comfort. They showed me around town, and we’d spend a lot of time chatting together. My host mom made me three huge meals per day; I finally had to tell her, ‘I can’t eat so much!’ I actually gained weight in Uganda.”

The food was basic but filling, the friendships he made were real and enduring.

“I’m now doing a little fundraising to help with college expenses for one of the grandsons that I became friends with,” William says. “Staying with this family, and seeing how locals live in Uganda, all of it made a huge impression on me.”

William wanted a hands-on medical experience, and he certainly got it.

“What you did at the hospital depended largely on the doctor’s discretion,” he says.

The staff must have noted William’s maturity and competence quickly, because soon he was able to observe whatever he was interested in, and found himself more than once assisting in the surgical theater. 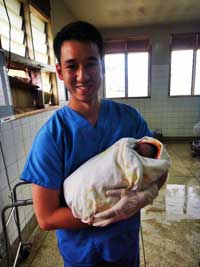 “I helped with sutures and handed instruments in surgery. In orthopedics I held patients down while their bones were being set, and helped to put on casts.

Once I was able to take care of a newborn following a C-section: under supervision, I cleared mucus out of the baby’s nose and mouth, tied off his umbilical cord and bundled him up like a burrito.”

The doctors were helpful, open and eager to teach. Williams has plenty of eye-opening anecdotes.

“I was once in surgery, and the doctor’s cell phone rings,” William remembers. “The surgeon says, pick up my phone. So I reach in his pocket, thinking, is this some kind of a joke on the new guy? But no, the doctor says, pick up my phone and put it up to my ear. So I did, the surgeon had a quick conversation and then I put the phone back. This was during surgery! It was no joke!” he laughs.

William was also amazed by the ingenuity and skills these very hard-working doctors displayed every day as they faced a lack of basic supplies and an insufficient infrastructure.

“In orthopedics there was this doctor named Faza, who made a splint we called the Faza Splint. It was made from a cardboard box! I told him, ‘You’re like MacGyver’” William says, referring to the TV detective known for making tools and jury-rigged devices out of common household items.

William and Faza, watching MacGyver in Iganga, Africa: this is the brave new world of ELI volunteers. One wonders whether thanks to William, Faza’s nickname in Iganga is now MacGyver.

“There was an anesthesia machine. But the lack of consistent and reliable power made its use difficult So it just sat in a corner while the anesthesiologist did everything manually.”

This was a valuable public health insight: the gifts of technology for the developing world are useless if the necessary infrastructure isn’t there to support it.

“My placement was amazing, and it gave me such good perspective on medicine globally. I recommend all my friends studying in the health sector to volunteer or intern in the developing world.”

He was pleased ELI Abroad made the experience so affordable.

William also thrived in the freedom the program gave him.

“There wasn’t a lot of hand-holding. Michael, the ELI coordinator in Iganga was very helpful, but in the hospital you definitely have to be a bit outgoing and independent to get the most from the placement. But once you put yourself out there, ask questions, engage the staff -- then you’ll find unexpected opportunities crop up a lot.”

Word from Africa is that William made as big an impression on Iganga as it did on him.