I hear you had a very intense experience.

I went after my first year of med school, so I hadn’t spent a lot of time in hospitals yet – most of my work was classroom stuff. In Uganda everything was hands-on: the first birth I had ever seen, the first surgery, I even had my first “patients, ” a bunch of orphanage children who were brought to us to be examined. So it was crazy… but good.

Both Anne-Marie and I were interested in sub-Saharan Africa, in going there to help. Uganda looked like a good first step. A friend had volunteered in Ghana, and loved it, but Uganda seemed like a less known entity, but still relatively stable – and with a lot of need.

What was the biggest thing you learned in Uganda?

I certainly learned a lot about medicine but I also learned a lot about human nature. I learned that incredible poverty exists in a way I’d never experienced before. It was pretty sobering to realize that poverty is the actual way of life for hundreds of millions of people – people who get no break from it, ever. In my case, I go and visit, I feel I’m pretty impressive for having spent two months in Uganda. But then I get to come home where I can take a hot shower every day, go out to dinner, take vacations: things these people will absolutely never experience at any moment in their lives.

Did you experience culture shock? 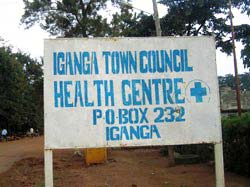 I’ve done a lot of ‘living outside of civilization’ previously, so I wasn’t shocked by the lack of showers or the toilet situation. But Anne-Marie and I certainly had to get used to being pointed and stared at all the time. I don’t know if that was culture shock, but it was very different. We also felt a bit constrained by the fact that most of the people didn’t speak English – the hospital staff spoke English, the average Ugandan spoke some English, but the hospital patients spoke mostly the local language, and Swahili.

How was your home stay?

It was pretty good. I’d say the only thing that proved to be a bit of drama was the food situation. Anne-Marie got tired of the bland carbs, and the enormous portions. Sometimes we felt like we offended our host when we didn’t finish, or when we ate out at the couple of Indian restaurants in Iganga.

What would you say to someone considering volunteering in an African hospital?

I would say, they absolutely should do it. That it was incredibly educational and sort of world-view changing for me. I would tell them -- certainly to a med student, but even to a doctor -- to expect to encounter some real disappointments in the kind of difference they feel they can make. I would say to expect to butt up against some overwhelming, insurmountable obstacles. But I’d also say, that what I got out of it was a deep sort of awareness that people live with really challenging medical conditions and with really challenging life conditions. I was surprised by how much I was – and still am – affected by that realization.

Many medical volunteers bring some supplies with them.

We did too, we brought six to eight boxes of gloves; we ended up giving away a couple of stethoscopes, and a blood pressure cuff. We bought a lot of drugs at the local pharmacy that we gave to children at the Orange Giraffe orphanage, and we donated some drugs and baby formula for the hospital.

Did you feel pressured to donate or buy things?

I would say that we did, but we also felt it was reasonable. [Laughs] The hospital really did need a lot of stuff. [On the other hand] we did get very good very quickly at not giving people money who asked for it all the time.

What sort of clothes did you bring with you?

We didn’t bring very many clothes, but what we brought was the right type of clothes: quick drying and light things. Actually I got some fishing shirts that buttoned up, and had collars. They were meant for fishermen but they were formal enough for the hospital and still very airy. Anne-Marie wore long flowing skirts which worked great.

Did you make friends?

Yes, I’ve just been emailing with one of the doctors, and we’re keeping up with a couple of people. We became very good friends with another medical volunteer, who lives in New Orleans and who visited us here in Columbus for a few days. She’s become a good friend.

Did the experience change what you want to do in medicine?

I haven’t considered this before, but this year I’ve been feeling more strongly about how I want to deal with my patients. In medicine, you can specialize, where you’re in very technical field, where you don’t know a lot about the patient, you’re just doing procedures, or taking care of emergencies. Or, you can be in a very patient-centered field, where follow a person for a long period of time, like an oncologist or even a general practitioner. When we were in Uganda, I noticed this huge divide between the doctors and the patients, between me and the patients - and that was exacerbated by the language barrier. It pushed me to realize that I wanted a closer relationship with patients, be part of the decision-making process in their care, and sort of follow their care. Anne-Marie went to Uganda thinking of being an obstetrician, deliver babies. She delivered a lot of babies there, she got an awful lot of experience with it -- and she still wants to be an obstetrician and deliver babies.

In retrospect, would you have done anything differently?

Not really. I think it was really important for us to be there for six weeks. I was really in the routine by the end, it gave me a good feel for the hospital and how it would feel to work there every day, for a long time. But it was also great to have some time to travel afterwards. We needed the time to decompress.

Do you think this experience will help you in med school, or beyond?

Not in med school, but I think it could be helpful when I’m interviewing for internships, to mention this experience.

Any reverse culture shock when you got back?

Definitely. We went to London right from Uganda and that’s where we experienced our culture shock. Very unwisely, the day after we got there, we went to Harrod’s. We were walking around this behemoth of a super store, it’s got incredibly fancy art gallery room, and a Christmas-theme room, and it was just way too much. It was outrageous, the most consumeristic place we could have gone to. For several days after we got back, we were extremely aware how extremely easy and consumer-oriented everything was, and we noticed right away that no one was staring at us, or pointing at us, that we were no longer the center of attention.