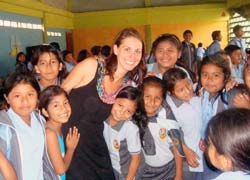 After six years of a stressful, deadline-driven job in a big corporate setting, Sarah was looking for a change. As clichéd as it sounds, Sarah wanted to give back, to do something personally fulfilling. So she gave herself a seven month break, and headed south. Way south: to master Spanish and to volunteer in Buenos Aires. This Argentine city greeted her with the first of many surprises she’d experience throughout her say in Latin America: Buenos Aires, in many ways, wasn’t what she expected. She thought she was going to a developing country – but she landed in a sophisticated, cosmopolitan city. “I brought all these practical, casual work clothes but B.A. was more like Fashion Week,” she laughs. “I was surrounded by these incredibly gorgeous, skinny, fashionably dressed women with really long hair. I haven’t cut my own hair since then.”

Sarah had studied Spanish in high school, but when she arrived in Buenos Aires, she signed up for “an invaluable” four week-long course in the language. The class gave her a practical introduction to Argentine culture and stronger language skills she quickly put to use. “Learning a language is what you make of it. I could have spent my time hanging out with English speaking expats, but I didn’t.”

Instead, she worked in AIDS and HIV education and prevention, and volunteered at a daycare for children in a neighborhood deeply affected by drugs, poverty and AIDS. Volunteering gave her full immersion in the culture and a glimpse into the “other,” non glitzy side of life in Buenos Aires. 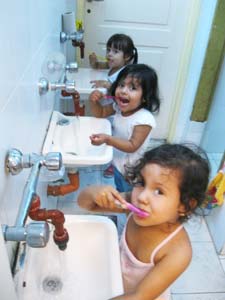 Two months later, Sarah traveled to Puerto López, Ecuador, a small fishing village where she was to teach English, and right away experienced culture shock of another sort. “Suddenly, I was living on a dirt road, and on my first day, the hot water went out and the toilet broke so I couldn’t flush.” This was no Buenos Aires. “My host mother came to my rescue, and it all turned out fine,” she says today, “I ended up loving living and working there.”

Her first day in school was equally challenging. Sarah found herself in an open school room with 50 seventh graders, no lesson plans and no materials. “I thought, Oh. My. God.” Undeterred, that very day, Sarah bought basic supplies at the village kiosk, went online to research lesson plans, and started persuading the school official to invest in work books. “I’m a planner,” she says, “I like to be prepared, and I wanted to create a good, effective template for the next volunteer.”

In retrospect, Sarah thinks the conditions at the school were shaped as much by need as by cultural expectations. “There wasn’t as much focus on education as there would be in the U.S. These kids were children of fishermen, and they themselves were expected to fish, maybe to work in the tourism sector just starting to grow in that area. Don’t get me wrong, these kids had skills. They could fish, they could fix things, they could do plumbing. If someone needed roof work done, they could do it. They could do all kinds of things American kids their age can’t. It’s just a different skill set.” In addition to the different approach to education, there is very little money in the way of teacher wages. “So school gets out at one,” Sarah says, “Because most of the teachers need a second job.”

Still, the school, its children and the town itself made a deep impression on Sarah. She knew she would come back – and did, for a month, last December. Sarah and Alice, the volunteer who followed her as a teacher in Puerto López, returned together. “We didn’t tell any of the kids, we wanted to surprise them. We only told the school director.” As it happened, the kids had a Christmas celebration at school on day Alice and Sarah came back to the village. “One of them was dressed as Santa Claus, and he saw us coming, and started shouting ‘Sarita, Alice! They’re here!’ and then all the kids spilled out of the classroom and ran to us… there was lots of hugs and kisses.” That human element – the relationships, friendships, the human connection -- is a vital part of Sarah’s experience. “Living in and volunteering in a town abroad gives you so much more than just backpacking in a country, because you get to really get to know the people and become welcomed as a part of the community.” One of her favorite memories from the trip was “just walking down the street to the school and all the people sitting outside their homes would say “Buenos días” or “Hello teacher,” even if I didn’t know them all individually.” 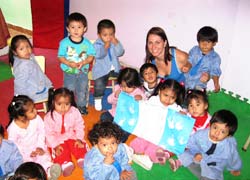 If Puerto López at first seemed challenging, to Sarah it now seemed like home, and volunteering seemed like a calling. Today, Sarah is looking for ways to combine her extensive organizational skills and her fluency in Spanish with her love of volunteering. She wants to work as an in-country volunteer coordinator, offering orientation, guidance and logistical support in a Spanish-speaking country. At ELI, we know Sarah can do it, and do it well. She has a whole village in Ecuador willing to vouch for her talents as well.