Kaleb was a journalism intern at City Express in Chennai India.

Did the internship help you learn or develop new skills?

Actually, yes. A lot of the things I practiced at the City Express I use here, especially writing headlines, working on my editing skills and learning to really pay attention to detail. My editor at The City Express was very critical when it came to facts and errors in grammar, stuff like that. The fact that she was so critical taught me to be the same way. I’m very careful when I write, and [as an editor] I’m careful when reviewing my reporters’ work as well. Also, at the Union Express, I was not only in charge of my stories, but also had to be in charge of organizing their layout on the page… so I learned to orchestrate the whole story, from beginning to the end. That’s something I definitely learned there.

Did you get college credit?

I did, I got credit for the internship and I will use a few of my published pieces from India in my professional portfolio, so it’s definitely been useful.

I wanted to do something abroad and considered interning for an international company here in Iowa. But a friend told me, “look, if you really want 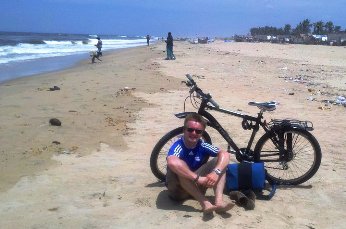 to do something like that, then just get out there.” So that night I Googled ‘journalism internships abroad’… focused on English-speaking places... saw India listed and thought ‘wow.’ I always wanted to go to India, since I was a little kid, but never thought I’d get to go.

What did your parents say? Did they freak?

[somewhat sheepishly] Well, actually I didn’t bounce the idea off them until after I applied and been accepted. When I told them, they said something like, “oh, India, sounds really cool, it’s a good idea.” And that’s when I told them I was all signed up to go.

Were you culture shocked when you got to Chennai?

I expected I would. And when I got there, there were definitely things that surprised me, but to tell you the truth, I really didn’t have much culture shock. I have some friends from India, and one of my advisors is Indian, and I talked to them about it a lot. I was more culture shocked when I got back. For the first couple of weeks back at school I kept thinking, “Life here is really hard. Wish I was back in India where things are easier.” [laughs.] I definitely had some reverse culture shock, which was interesting.

Did you have any communication problems?

Not much compared to understanding my roommate, who was from the UK, from south London! He had the worst British accent I’d ever heard. In terms of understanding me, I did have to repeat myself a few times, but Indians watch a lot of American television, so most are used to the accent. The biggest problem was when I was traveling, a lot of the places I went to in Northern India no one spoke English and my Hindi is not good. That was a bit more of an issue.

I stayed in an apartment very close to the City Express office. When I first got there I was in a five person apartment, two people in my room, three in the other. I was a bit worried about living with Indian guys I’d never met before, but it was really no problem. My roommate was really cool, we got along really well. And then I got moved into a smaller apartment with the British guy.

Did you make friends?

Most of the friends I met were through my writing - a lot of my sources were people I ended hanging out with. People I worked with were really cool, too. They threw me a surprise birthday party and I went out to eat with them quite a bit. That was fun.

Tell me about interning at the Express.

My editor-in-chief was one the toughest bosses I’ve ever had. She was nice, but she was hard on me sometimes, so I learned a lot. Since I have a lot of experience reporting and editing, I felt comfortable going out and doing stories. Sometimes I got to report on whatever I wanted, but you also get assigned stories and you have to respect that. It’s still a job, it’s not some goofy internship where you can be lazy. You have to work hard but you get a lot out of it when you put in the energy. I got to do write different kinds of stories, first-person columns about my experiences in the city; I got to report on art and movies. A lot of my friends [who did internships] in the US got to maybe do a little copy editing and maybe some filing – but I got to do everything. It was a really good opportunity.

What advice would you give to someone considering a journalism internship in Chennai?

Read as much as you can before you go. The more I tried to learn about India, the more I realized how much I didn’t know. People should do all the research they can, not because they’ll feel “behind” or because they won’t understand, but because there’s just so much to know, to learn and to explore about that country. Reading ahead of time lets you enjoy the place, and lets you talk to people instead of trying to research while you’re there. I wish that I could have stayed longer, but reading at least made me understand India more. One more thing: take the time to travel. It’s an amazing country. I spent a month traveling through India. But even if you don’t have a month, even if it’s only a couple of weeks, do it. Travel as much as you can. Go after your internship because by then you’re kind of used to things and how the country works. Otherwise, if you just get there, get on a train and end up in a place like Putna… [laughs] that can be a little scary.

Let’s talk practicalities: are there things you brought to India you didn’t need?

I brought too many clothes. And dress clothes I didn’t need. At my internship I wore khakis or dress pants and a collared shirt. You could wear jeans, but I stuck to khakis. And I never wore a tie, which surprised me.

What did you wish you brought to India with you?

A decent razor. The stores here only have crappy disposable ones. [He later clarified that neighborhood shops and markets only had the cheap razors. He had to search out higher quality ones] American coins too: a lot of people would ask me if I had any American money, and if all you have is a $20 bill then it’s “sorry, can’t give that to you.” Bring a good umbrella. In the rainy season, it rains A LOT in Chennai. And I missed milk. Real milk, the stuff they had there came in bags and looked kind of strange.

I’d recommend you buy your cell phone there, it’s $30 to $40. I brought my computer and watched movies on it, but I rarely got on the internet because I couldn’t find wi-fi anywhere. If you bring a computer, lock it up, they do get stolen once in a while, so keep an eye on it. Bring a camera, it would suck to come home with no pictures. I took over 4,000 photographs. I also had an iPod. But keep it light, travel light. And for the rainy season in Chennai, don’t forget that umbrella.

Interested in Thailand? Here's an interview with a journalism intern in Chiang Mai!