What things did you do in your free time that you either recommend, or do not recommend, for future participants? 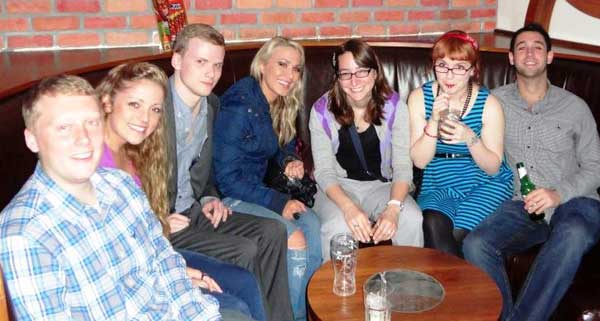 So much…we went on weekend trips mostly, as a group of 7. The first weekend we went to Cork and Blarney. You pretty much have to kiss the Blarney Stone if you’re visiting Ireland, and it’s also worth going because it’s an absolutely beautiful area. You can go on a nice walk, there’s a small lake that you can walk down to through some nice rolling green hills if you want to as well. The horses on the side of the road will let you pet them. We stayed in a hostel called Bru Bar & Hostel, which was very near the bus station and the main downtown area. There is some nice shopping streets there, about as nice as the Grafton area in Dublin. The people in Cork are well known for their very hard to understand accent, it’s also worth visiting just to hear what they sound like!

Another weekend we went up to Belfast on the train. We met some people on the train and had fun trip up and ended up going out with them that night. Belfast is a very nice city, and is very safe. If you get the chance, take the “Black Cab Tour” that brings you around the west side that was known for all kinds of events during the troubles. You’ll get to see a lot of political murals, and if you’re there in July like we were maybe the remnants of the bonfires. I’d avoid the parades though, sometimes they turn into riots in some areas. On the Saturday we took a tour up the Co. Antrim coast road to the Giant’s Causeway, another must-see for sure. Incredible, and it was the most beautiful day. (You’ll learn to appreciate those!) It was by a company called Allen’s Tours, probably one of the best ones. I think it was only 14 pounds. They make stops at Carrickfergus, Bushmills (the distillery), the Rope Bridge, and a little town for lunch. Their office is downtown in Belfast. While in Belfast we stayed at a hostel called Global Village. It was really nice and they had the cutest little Boston Terrier there. 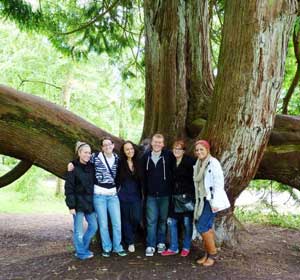 I went alone a few places – to Roscrea, Derry/Londonderry and Sligo. It’s worth going in to Co. Tipperary or anywhere in the country really just to see what it’s like. I have heard that Athlone is a “place to visit” for the country feel though I never went there. There are plenty of castle ruins to check out, one major one being Nenagh Castle in Tipperary. That’s a good day trip. Derry is up in the north – I highly recommend that you visit the Free Derry Museum, but be warned that it can be a bit disturbing. It’s a museum dedicated to the Civil Rights movement there and the Bloody Sunday massacre. Derry is very pretty, but you will likely run out of things to do within a few days so it’s probably a good weekend trip. There is an express bus from Dublin that takes 3 hours. Sligo was my very favourite – I went there on a total whim. I took a bus from Derry down to Sligo town, and then looked up hostels and found one in a place called Strandhill about 10 minutes out (local transit goes there right from the bus station) that had a surf school. For 30 euro you get a two hour surfing lesson with all equipment (wetsuit too) included, and you’ll be taught by a certified instructor. The water isn’t as cold as you probably expect with the wetsuit on. If you’re Canadian, you’ll be very happy to see the Maple Moose on the corner near the beach. I highly recommend visiting Strandhill if you’re interested in going surfing. I never made it to Galway City, but I heard that it’s somewhere that everyone absolutely loves. There are always festivals going on there, especially during July.

While in Dublin we went to the Guinness Storehouse – you have to go there. Very interesting, especially if you like the dark stuff, and it has an amazing view of the city at the top. Even if you don’t like beer, just the view is worth visiting for. Oh – and there’s a free drink up there too. We also went to the National Museum one afternoon, which I highly recommend, especially if you have an interest in Archaeology. We only got to see one small part of it, but they have an amazing collection of Celtic and Viking artifacts – lots of gold with very impressive detail work. There are also a lot of music festivals and concerts during the summer – we went to Red Hot Chili Peppers at Croke Park in June and to Electric Picnic (It’s a big music festival) in August. Of course there is always  live music in almost every pub. We also went on two guided tours – I usually hate guided tours, but I liked both of these. One was called the “Gravedigger Ghost Tour” and takes you to various “haunted” sites and they tell you all kinds of stories about graverobbing and murder. The tour guide made us laugh so hard it hurt. Very entertaining. Also, free drink at the end. The other was the “Literary Pub Crawl” which would be enjoyed by anyone familiar with Irish authors (i.e. Beckett, Joyce, Wilde, Yeats). You go to four or five pubs that the writers used to visit, and the guides recite and act out scenes from books and poems. They were really very good.

And last of all…the pubs. That’s where I probably spend most of my free time with housemates or friends I met while in Ireland. In Rathmines there’s one called The Barge that is really great, especially when a match is on. Thursdays were the best nights to go there. There are more “touristy” pubs in the Temple Bar area that are also worth going to at least once, like Gogarty’s, the Auld Dubliner, the Palace Bar, and The Temple Bar. My favourite one was O’Donohue’s just off Grafton. Don’t get it confused with the other O’Donohue’s a few blocks away, it’s nowhere near as nice. It looks a bit like a horse stable and is very very smoky and crowded, and you can barely hear the music. The better O’Donohue’s has a really nice atmosphere.

So basically what I’m saying is that you should go as many places and meet as many people as you can. Don’t pass up any opportunities. Best summer of my life!