An Open Mind - A Rewarding Experience

Ashley’s internship in Physical Therapy is a good example of how keeping an open mind can make for an especially enlightening trip.

South America was her first choice, but the required level of Spanish was intimidating. “I didn’t have enough of the language,” Ashley says. Switching her sights to South Africa, Ashley was disappointed to find the hospitals there required either graduate students or interns with a Master’s degree. Undeterred, Ashley began looking into Thailand.

“I had to choose between Bangkok and Chiang Mai,” she remembers. “And I’m so glad I picked Chiang Mai.”

And boy, did Ashley take advantage of those outdoor opportunities. 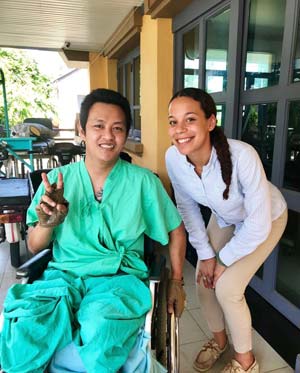 In Chiang Mai, Ashley lived at the Volunteer House, sharing a room with two other girls. Throughout her 3-week stay, she became friends with many of the other volunteers and interns, a diverse groups that included Germans, Austrians and Australians. Friendships were made: “I still keep in touch with some of them,” Ashley says.

Her days revolved around her placement at a Chiang Mai hospital. She’d eat breakfast at the Volunteer House, then walk or ride a bike to the facility, where she worked from 9 to about 3:30. She mostly shadowed therapists and doctors, although occasionally she was able to assist in stretching out some patients. Ashley says she didn’t specifically learn new techniques at her internship -- many of the therapies originate in the U.S. and the West -- but she was intrigued by the different vibe from that of American hospitals.

“It was almost a happier atmosphere,” she muses. “A lot of the therapists tried to get patients to move and if someone would fall, they’d just laugh, and so would the staff. It seems more uptight here.”

Patient notes were written in English, so Ashley could study them, and she was encouraged to ask a lot of questions. Some staffers were especially welcoming, Ashley remembers one therapist in particular who took her under her wing, ate lunch with her and took her to a near by marketplace. It made for an enriching experience, despite the occasional language barrier, since not everyone was fluent in English.

Ironically, Ashley found that barrier to be somewhat helpful.

“Instead of listening to what they said, I’d just watch very, very closely,” she says. “The language barrier made me concentrate much more on what they were doing, rather than trying to say. So in a way, it was less distracting and more technique oriented. ”

Note how Ashley took a possible negative and turned it into a positive. This is the way to make the most of your international internship, of pushing yourself beyond your comfort zone and learning in new, unexpected ways.

Evenings and weekends were a time to kickback and explore. “At night we’d go into town, walk around, grab dinner. There’s always something to do in Chiang Mai.”

Eating out was also a bit of an eye-opener for Ashley, who’d never traveled in Asia before.

“The restaurants and food stands were run differently,” Ashley laughs, noting she’s a self-described “super clean” person. She recalls seeing a cockroach run across her foot in one little place. “If I had gone by my own American standards, I wouldn’t have enjoyed it all so much. At some point you have to accept that things are different, that you’re judging a place by your own bias.” She never got sick, and she loved the food, although she admits after a month, she did miss some of her American favorites.

Ashley’s weekends were also very different from anything she does around Chicago. There were excursions into the jungle, an elephant sanctury, 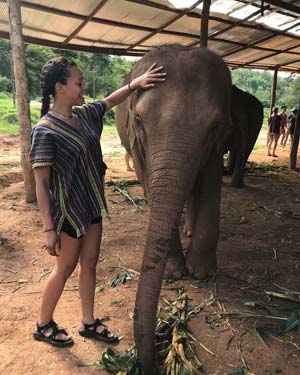 If she could have changed anything about her trip, Ashley says she’d have stayed longer.

“Three weeks seems like a long time when you’re planning it,” she says. “But once you get there you realize, whoa, I could have totally stayed another week.”

If not longer. Ashley says, if she ever does an international internship again, she’d combine it with more travel.

“Some of the other interns and volunteers would work for a few weeks, then travel to Vietnam or Cambodia, and then come back for a few more weeks of internship.That’s what I would like to do next time.”

Lesson learned. One of many.

“At home, I’d never come up to strangers and suggest we get together for dinner in the evening, like I did with other interns in Chiang Mai. That whole experience had me grow so much as a person.”

Professional experience and personal growth: Exactly what an ELI internship abroad is all about.