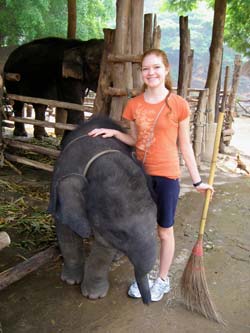 A Gap Year Adventure: Medicine in India and Thailand with Elephants on the side. Olivia, pre-med sophomore at Rice University. ELI medical volunteer/intern in India and Elephant camp volunteer in Thailand.

“Carpe diem,” seems to be Olivia’s motto, and she “carpes” internationally. At just 18, Olivia did what most people only dream about. This vibrant, outgoing young woman took a gap year before starting college, and plunged headlong into an exotic adventure. As a prospective pre-med, Olivia chose an ELI medical placement in two hospitals in the southeastern Indian state, Tamil Nadu. She arrived in India on a steamy night in September, and was instantly amazed by intense 4 a.m. traffic: welcome to Chennai. Olivia describes it as “hectic, congested and noisy” – and by the smile in her voice you know she wouldn’t have it any other way. A month later she traveled south to a bigger, more modern hospital in Madurai, the third largest city in Tamil Nadu. This two-month long adventure “exceeded my expectations,” says Olivia “It was the experience of a lifetime.”

In both hospitals, Olivia enjoyed open access to medical professionals, patients and various hospital departments, everything from the dermatology clinic to witnessing surgery in the operating theater. It’s the kind of opportunity few American pre-meds enjoy, and it gave her a glimpse into medicine she wouldn’t have had in the U.S. In Chennai, Olivia spent her days following doctors on their rounds, learning about illnesses and patient care. She was invited to accompany optometry clinicians offering free cataract screenings in the Indian countryside. As part of community outreach, Olivia wrote pamphlets and designed awareness posters on topics such as tuberculosis and diabetes. She even had time to visit local schools and orphanages where her gifts of stickers and crayons were as thrilling for the kids as her red, curly hair worn in a long pony tail. “The kids would ask me to take down my hair so they could see it better,” she laughs, fair-skinned redheads being hardly a common sight in southern India.

By the time she got to the hospital in Madurai a month later, Olivia was an old hand at this medical volunteer business. She befriended a group of nursing students – most of them more or less the same age as Olivia – sat in on a few of their classes, and shared long talks during lunch in the meal hall. “Some of the other volunteers would have lunch brought to them, and they’d eat it together. I put a stop to having it delivered to me. I ate with the nursing students, and even with the doctors, sometimes.” One doctor in particular became a friend and mentor she keeps in touch with to this day. “She invited me to her home for a great meal, I met her family, she even invited me to an Indian wedding reception. It was spectacular!”

Olivia returned home to the States newly committed to the idea of medicine – and hooked on exotic travel. A few months later, she was on the phone with ELI coordinator Malissa Spero, discussing her next adventure: volunteering at an elephant camp in Thailand. By then, word had reached ELI and Malissa how active and helpful Olivia had been as a medical volunteer in India. “Elephants are great,” Malissa told Olivia “But you’ll probably want to do some hospital stuff in Thailand too. Let me design a custom program for you.”

By spring, Olivia was in back in Asia, living in the jungle at a Thai elephant camp. She’d be up almost at the crack of dawn (“I learned to love waking up early!”) to ride an elephant, bareback, to the river for the first of its two daily baths. Olivia would hang on for dear life as the animal took “massive steps” down a steep river bank, swinging its enormous back with Olivia on top of it. “You can’t believe how hairy elephants are!” she exclaims, “With coarse hair almost like wire.” After bathing, Olivia would help make elephant snacks of tamarinds rolled in rock salt. “You’d plop these softball-sized tamarind balls right into their mouths,” says this woman-afraid-of-nothing.  There were regular elephant shows during which Olivia and other volunteers sold bananas to be fed to the elephants by audience members. Another time, she was invited to go to a farm to cut down corn used as elephant feed. “They told me to wear long sleeves and long pants, and they gave me a machete.” Olivia laughs. “I felt like Indiana Jones.” Another highlight was watching the process of elephant dung turned into paper, although that paled in comparison to watching elephants paint. “Elephants, making paintings!” Olivia says, and you can hear the wonder in her voice. “It’s something you have to see to believe.”

Two weeks later Olivia put away her shorts and bathing suit, donned polo tops and long skirts, and resumed medical work, this time in the northern Thai city of Chiang Mai. The hospital was more modern and more extensive than the two she worked in India. She was able to observe radiologists and pathologists at work, and visited a hospital dental clinic, something unavailable in India. But in particular, Olivia enjoyed the seriousness afforded her by Thai doctors, who would take her on their rounds and explain their thought process during diagnosis. This experience left an indelible mark: today, Olivia is drawn to the problem solving in internal medicine. “I’ve always liked puzzles, so that might be a possible route for me.”

Whatever is next in store for Olivia, you can be sure it will be exciting. This is a young woman who likes to push herself. “When I first went to India,” she says “I just wanted to be fearless. I wanted to… grab a map and go. How many times are you going to find yourself in India or Thailand? You must make the most of it then and there.” Imagine that drive and curiosity in your doctor: Olivia’s future patients will be lucky indeed.