Nutrition Internship in the Philippines

Elvira in the Philippines

Elvira, an energetic young Spaniard from Barcelona, knew that if she was going intern abroad, it would be in some exotic place.

“I was always interested in Asia,” she says. “And then a friend told me, go to the Philippines. The people there are so warm and welcoming. You’ll love it. And she was right!”

Elvira spent a total of two months in the Philippines, six weeks of it interning in a nutrition project on the island of Leyte. In 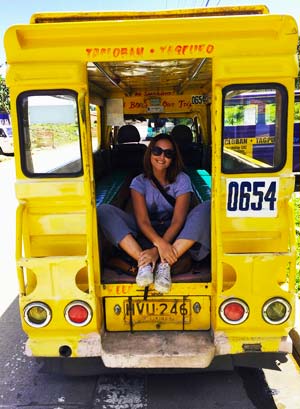 retrospect, she wishes she’d had more time at her placement.

“I think spending a full two months interning is ideal. Six weeks seemed a little short, because it takes some time to really get comfortable. Now I tell everyone, if you want to intern abroad, try to go for at least two months.”

Like most volunteers, Elvira experienced some culture shock after arriving in the Philippines (“the first week is the hardest,”) but her host family went out of its way to make her feel at home. “I was treated like a member of the family right when I arrived.” Elvira was especially touched by her host mom’s concern about the food she served.

“I have some stomach issues, and my host mom was always asking, ‘Are you OK? How do you feel? What can I cook for you?’” Elvira laughs. She never got sick, and she always enjoyed her host family’s meals.

Elvira’s placement was helping to prepare nutritious meals at an NGO-run school for impoverished children, age 9-17.

The school was about an hour from her host family, a trip on a local jitney that was an adventure in itself.

“It was a crazy ride,” Elvira says. “The roads are bad, the drivers go fast, and at first I felt a bit car sick.”

At the school, she and another volunteer would accompany a staffer to a local market, and later helped with the cooking. The food was typically filipino, fresh and nutritious. Elvira laughs recalling a day she and a volunteer from Australia were asked to shop at the market by themselves.

“Suddenly, the prices doubled!” Elvira says. “We said, no, no, no. We paid half yesterday.”

Her Australian friend also encouraged the children in helping with the food.

“At first they were shy, but she showed them how to cut the vegetables, and the kids started enjoying themselves.”

It was a good way to break the ice: the children soon began talking and playing with the volunteers.

“They were grateful we were there.” Elvira says. Getting to know Westerners isn’t exactly an everyday occurance for this population of youngsters.

In the afternoons, Elvira and other volunteers would sometimes visit each other’s placements. It made for a full day. She’d eat dinner about 6:30 pm with her host family, and kick back with other volunteers in the evenings. When they weren’t socializing or organizing get-togethers, they would head to the local cafes in search of wi-fi.

“The volunteers became friends. On weekends sometimes we’d join activities at the Boys and Girls Club, or we’d explore the area together and go to the beach. We’ve kept in touch after going home. In fact, a couple of the volunteers will be visiting me in Barcelona.”

The six weeks passed in a flash, but the trip gave Elvira a whole new perspective on what she wants to do in the future. She 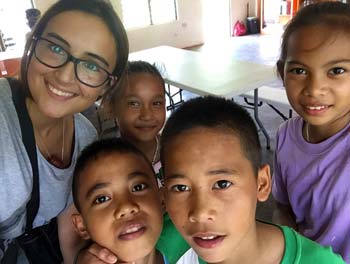 had studied law and criminology, and now has sharpened her focus.

“Thanks to my internship, I’ve decided to get my Master’s degree in human rights, especially children’s rights.”

She was struck by how difficult life can be for poor Filipino children.

“In some of the rural areas, they don’t go to school because they have to work. I was sad to see these youngsters deal with adult issues. The girls aren’t encouraged to study beyond the basics and are pressured to marry young.”

Elvira says, these are not insights she’d have gained had she been a mere tourist.

“When you volunteer, you get to know the country in a deeper way. It’s still a beautiful experience in a beautiful country, but as a tourist, you won’t see or do what I did at my internship.”

What Elvira did was to help change lives -- and it helped to change hers.