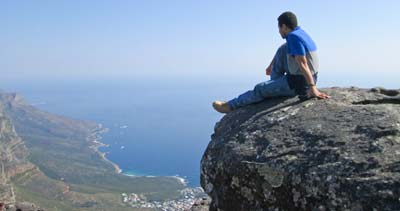 You know you’ve had a successful internship when your company doesn’t want you to leave! That was the case with Peter, a civil engineering student in Cairo who spent two months working in Cape Town.

“I had done one internship before, in Egypt, but I also wanted to work internationally” Peter says. “I thought it would be a good experience, but I was surprised just how perfect and successful experience it turned out to be.”

Like many other ELIers in South Africa, Peter lived in a group home with other interns and volunteers. 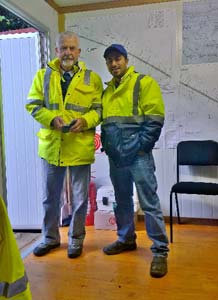 “It was a very international,” Peter says. “There were people from the Netherlands, Germany, France, England and the U.S.”

He must have made a good impression right away because soon the site engineer asked a co-worker to pick up Peter on his way to the site and drive him back home every day. The two became friends, and Peter found himself a permanent ride.

“Not fair!” joked the other interns who had to take public transportation to their placements.

Looking back on those first days, Peter says, “It’s good not to have specific expectations when you start an internship, just learn.”

It’s something he learned firsthand after the road construction project he was assigned to had been postponed due to heavy rains. Instead, Peter spent the first two weeks working on another project - building a new bus station in the city center.

As junior site engineer, Peter was just under the site’s principal engineer, and part of his duties was to supervise and manage the work crew. The position also required a bit of after-hours research, with Peter using online resources to study the technical specifics of the area.

As part of his internship requirements for his university, Peter had to write a report on the project he worked on; that report was so well received by his company in South Africa that it was incorporated into the firm’s official overall report for the entire project.

“I learned a tremendous amount,” Peter says. “It’s one thing to study theory in school. But on the job you have to manage people, communicate well, deal with setbacks and problems and open communication channels with the upper management. The practical experience I got is invaluable.”

So were the friends and trips he made: on weekends Peter joined other interns and volunteers, checking out Cape Town’s exciting nightlife and taking day trips to nearby attractions: hiking, stunning beaches, wine tasting, safari and exploring the sophisticated nearby historic city of Stellenbosch. Peter tried to squeeze it all in.

“It was a great surprise how much traveling I was able to do.” Peter says.

“On the week-ends, my housemates and I would head out of the city. I didn’t have to travel by myself, we always traveled as a group. I even went swimming in the ocean! Crazy, because it was winter in South Africa and the water was only 8 degrees Celsius (46 degrees Fahrenheit.)"

He was also invited by his friend at work to spend his last weekend in Stellenbosch, one of the oldest and prettiest towns in South Africa 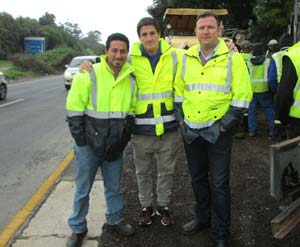 “It was a wonderful side trip,” Peter said.

When it was time to go back home, Peter was as sad as his employers, who sent word to ELI’s coordinators just how pleased they were with his work and contributions. What would this rock star advise other prospective interns?

“Don’t set your mind on doing specific jobs. Go with an open mind and be ready to work on unexpected projects. Get really involved in the job. Work hard, and take advantage of all the opportunities. Learn from everything.” He also adds, make the most of the available personal connections.

“Get to know your coworkers and supervisors. Reach out to them. They will appreciate your interest, and they’ll like and trust you more if they know you. Create relationships: that’s probably the most important thing you can do during your internship.”

Great advice from a great intern.