Anisha’s internship started like most others, but it ended with an unexpected twist. 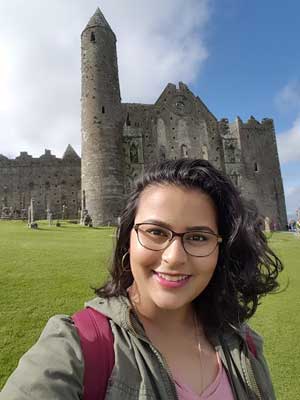 Like many ELI’ers, Anisha was looking for a pre-vet placement where she could learn and practice hands-on skills that would help her once she entered vet school.

An opportunity through ELI at at a veterinary hospital offered that, and a chance to live in Ireland, Anisha’s first experience of living abroad.

“I’d been to Dublin with my parents before, but this was different: I was an adult, on my own and I admit, at first I was nervous.”

She was placed with a family used to young people - her host mom and dad have two adult children - and used to jet lagged visitors, so no one was surprised when Anisha’s first activity upon arrival was taking a nap.

In the next few days she quickly became part of what she describes as “a typical Irish family: upbeat, happy, full of quirks, humor and fun sarcasm. It reminded me of my own family.”

An orientation the day after her arrival introduced her to other interns (many of them American and German), what to expect at her internship, weekend travel opportunities and the basics of living in Dublin and getting around on public transportation. This was especially useful for Anisha because her placement was a 45-minute bus ride to the center of the city from her home in the outskirts of Dublin.

“The orientation definitely made me feel less alone,” Anisha remembers. “I knew there was a support system and others in the same position as me.”

Her internship was a mostly full time, 9-4 position, although it had some flexibility, depending on what surgeries and procedures were scheduled at any given day.

“At first I mostly observed, and then I was assigned small tasks. Once the doctors and nurses were confident of my abilities, I 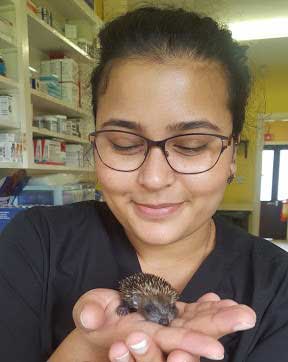 was given more responsibility. But even in the beginning the staff wanted me to do stuff and learn.

I went from just watching, to cleaning and shaving the animals in pre-op, to monitoring anesthesia and offering post-op care,” the latter something Anisha found particularly satisfying. The care offered the animals ranged from the basics to the complex: Anisha says she saw a lot of tumor removals.

The staff at the hospital was courteous and open. They encouraged interns to ask questions and seek new challenges. “They’re pretty careful not to pile stuff on the interns, but they also know this is a chance to gain invaluable insight into veterinary science - and they wanted us to take advantage of that.”

It made for a long day at the hospital, one that had Anisha coming home “exhausted but excited.” She appreciated having her evenings to kick back with her host family to recharge for the following day. She enjoyed their quiet evenings together, although when she was up for it, she also joined her host family in local pubs, or watching Irish football.

“I’m a sports fan, so that was great fun for both me, and my host mom and dad.”

Thursday nights were a time to meet with other interns in Dublin, and weekends were for travel. Anisha took bus tours to Galway, Cork, Blarney Castle and Malahide.

“The two months I was there just flew by. I’m glad I was there two full months, and I easily could have stayed longer. The first month you just adjust to everything and learn the job, so you really come into your own in the second month. I think going for any shorter period wouldn’t be as instructive or fulfilling.”

So is Anisha applying to vet schools? Here’s where the twist comes in.

“I learned so much in my internship. And one of the things I learned was that my allergies to animals keep getting worse! I can’t be a vet - I’m allergic to animals!”

Instead of veterinary medicine, Anisha is redirecting herself toward public policy with veterinary issues and animal rights as a 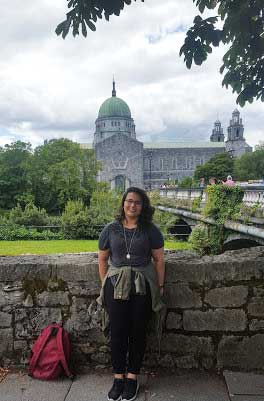 focus. She wants to conduct research, and work on program development that include animal rights within the larger context of public policy.

“I’m a senior now, and I’m taking classes in philosophy and ethics as part of my preparation for grad school. My hands-on work with animals has given me tremendous, real-world, insight into some of the theoretical things I’m now studying.”

She urges other prospective interns to push themselves to go abroad.

“It doesn’t matter if your internship doesn’t lead you to a specific career, or to something else. It still will be part of your experience, a part of learning about yourself.”

She cites having to adapt to a different culture as crucial to her growth as an adult.

“When you live and work abroad, you learn to keep an open mind and you make connections you wouldn’t have had if you stayed at home. It’s enriching in every way.”

We couldn’t have put it better. Wishing you a great last year in college, Anisha!