Stacey, a senior at McGill University in Montreal, completed a Journalism Internship at CityLife, a lifestyle magazine in Chiang Mai, Thailand 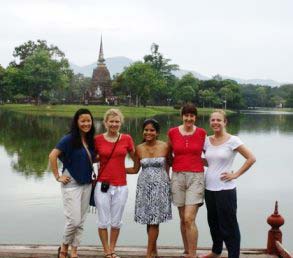 I knew that I wanted to go far away from anything familiar, and Thailand seemed the most exotic.

Was it what you expected?

When I got there, I was almost disappointed. I wanted the exotic but there are a lot of western aspects to life in Thai cities. You can easily live in a western “bubble.” You have to consciously make the effort to integrate. Which I think did. I made a point of getting to know other Citylife employees and making friends outside of my program, and I traveled a lot, all over Thailand; beyond Bangkok and Phuket. In general I think it’s best to come with low expectations. Well, not “low” expectations – but maybe “no” expectations, it’s important to be up for any and everything. Be open to the experiences as they come. That’s what I learned.

Tell me what you got out of your internship.

It was life changing. First and foremost, it gave me my start in journalism. Before, I was interested in law, but once I really discovered journalism, all thoughts of law school went out the window [laughs.] I always loved travel, but [through the internship] I discovered travel journalism. I discovered that I loved writing and that I actually wasn’t bad at it. It was one of those epiphanies.

What did you do at CityLife?

I worked in the editorial department. I was assigned stories and columns, but I also took initiative to write my own articles. My personal favorite was a piece I did titled, “How to Survive in Chiang Mai Under 5000 baht a Month,” where I interviewed low-income locals about their day to day life. I also interviewed, with the help of a translator, the author of a bestselling book in Thailand. That article got a lot of great feedback, and was later reprinted in a magazine associated with the main national Thai newspaper, the Bangkok Post.

Yes, I had a lot of opportunities, received a lot of great feedback, and a lot of encouragement. My boss, an amazing woman, was very welcoming and took me under her wing, so to speak. She helped with my writing, allowed me to shadow her interviews and became somewhat of a mentor. They were very open at Citylife, and let me do as much as I wanted, giving me opportunities I would never have had in the western press. In my second month, I was even allowed to take my own pictures [which were published.] Thanks to the internship, if you Google my name, you can see my work. I now have a portfolio – not very big, but it’s an important start.

What would your advice be to prospective Chiang Mai journalism interns? 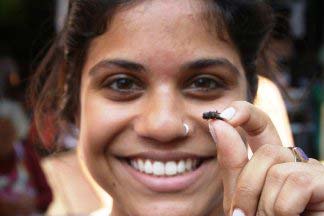 Come with an open mind – the expectations thing. Be active. Not “pushy” exactly, but outgoing and confident. Say, I want to write this, I want to take pictures. A lot of the work you’ll do will be on your personal time. No one will tell you, “do this now,” so you have to work hard and to have some discipline. Take initiative. People will respect you for that. My other advice is to travel – widely. Don’t just get stuck in the big cities and beautiful beaches. From north to south in Thailand, there is so much variation and diversity, don’t deprive yourself of being a part of it.

What did your parents say when you told them you’re going to do journalism in Thailand?

My parents have gotten more or less used to my crazy ways. Their thought was, “we can either support or fight her on this one.” They were concerned that [in contrast to law] it’s kind of a risky career choice, and they weren’t thrilled with that. But later they arrived at the conclusion that, “This is what she likes and she’s going to pursue it no matter what.” They think the experience helped me grow, and I agree.

Tell me about your housing in Chiang Mai.

I lived in a kind of hostel, a former guest house I think, with 20 volunteers and interns from different companies. They mostly taught English, did medical work, or worked in orphanages. I was the only journalism intern. At first I was in a room with four people, but there was a bit of turnover and eventually I shared a double with my closest friend there, who taught English. I liked it, but it can be isolating culturally to live with 21 tourists. So I traveled a lot and spent a lot of time with friends I made outside of the program, including some of my colleagues from Citylife. I prefer assimilated travel, but that’s just me.

What did you bring that you didn’t need?

[laughing] Make up, perfume. My advice is, don’t take all your toiletries, you can buy a lot in Thailand. If you’ll be living in a large home, bring ear plugs. And if you’re really picky, bring your own sheets. Otherwise pack light. [Odds are] a lot of your clothes from home won’t suit the weather, and will not be practical.

What did you wear to work?

On my first day I was in heels and a blazer. Never wore them again. [From then on, ]I was in jeans and presentable tops. It was a casual environment, which I loved.