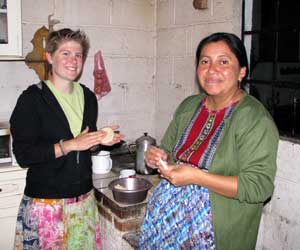 “Don’t cling to your passions. Try some new ones.” Dawn says this as she lists advice she’d give to prospective international volunteers, then chortles when she realizes that it sounds a lot easier said, than done.

But in fact, Dawn lives this mantra, even if she’s not quite aware of it herself. Dawn loves to travel – as a high schooler she was an exchange student in Costa Rica. Her love for the outdoors led her to consider man’s role within nature, which in college led her to focus on global health issues, sustainable agriculture and food security. As much as she thrived in her classes, by junior year she was a bit burned out. “So much of what I was learning was conceptually based, and a bit vague.” She remembers. There was a lot of “talk” about community development – Dawn wanted to see it in action, plus she wanted to sharpen her Spanish-language skills. Her Flinn scholarship at ASU encouraged study abroad, and with its support, and the support of other ASU scholarships, Dawn left school for a semester, and headed to Central America.

Her first placement was in Guatemala, where she spent six weeks teaching English, and starting, from the ground up, several community gardens.  She gardened with her pupils, on land donated by local villagers. They weeded, prepped and tilled the soil, and used donated seeds to plant beets, spinach, carrots and cabbage. As they worked, Dawn “encouraged the kids to preserve their cultural connections to the land, utilizing the knowledge and practices of their Mayan ancestors.” She also emphasized caution “with modern industrial agriculture techniques that often deplete soils and harm community health.”

As the gardens took shape, Dawn’s Spanish blossomed, and her connection to Guatemala deepened. She became close to her host family, in particular her host mom. “I loved living there. The family was very open and welcoming.” After work, Dawn would help her host mom make tea and fresh tortillas for dinner, and afterwards they’d sit together and talk for hours. “It was a beautiful experience.” They keep in touch via email and Skype. When her host mom gave birth recently, Dawn sent a baby hat she’d crocheted, a meaningful gift since it was her host mom who taught Dawn how to crochet during those evenings together. In international volunteering, the gift of knowledge goes both ways.

The gardens Dawn started last spring are still there in Guatemala, though the kids completed their first harvest after she’d already left. Will they continue? “They might,” Dawn says thoughtfully.  “One of the things I tried to instill in the kids is to farm for the love of it, for the pleasure of nurturing the plants and the soil.” But she also realized something profound about the limits of foreign aid. Community development, she says, “is humbling.” She learned that “you can’t just come into a place, tell people, this is what you need to be doing. And you can’t just start a project. That’s not enough. There needs to be a culture and institutions to maintain it.” 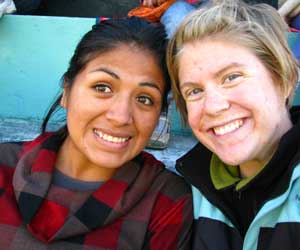 Dawn’s next port of call was a three month-long stint in Peru. This time, she focused on teaching English – and surprised herself by how much she enjoyed it. She taught six classes per week to elementary school children. “I pretty much made up my own lesson plans,” she admits cheerfully, “There was a lot of singing and a lot of hokey-pokey.” After school, Dawn headed to a non-profit where she tutored, helped with homework, and even taught some basic math. “Math! I had to make myself remember a lot of what I’d forgotten,” she laughs. Dawn also observed and studied the indigenous culture and Quechua, the indigenous language spoken in the area. Teaching, and her obvious respect for the locals, integrated her into the village. Peru’s tourism is fairly well developed and, as an American, Dawn was less exotic there than in Guatemala. Still, she was touched by the warmth and kindness of the local people.  Everyone seemed to know her, and welcome her. “I was surprised by how quickly I was accepted.” If she had to do it over, the only thing Dawn would change was her host family set up in Peru. “There was another volunteer living there, and that meant I spoke more English than if I’d been there alone with the family.” Another lesson learned: community building is easier when you’re 100% a part of that community.

Ask her about her plans for the future, and Dawn reels off a list of projects she’s applying for or researching. Tajikistan. Africa. Her dream job would be with an international NGO in community building, or with the USDA, encouraging food security, local farming, sustainability. The sky’s the limit for someone so passionate and adventuresome. Once she graduates, we know she’ll take off, no doubt for somewhere very exciting. 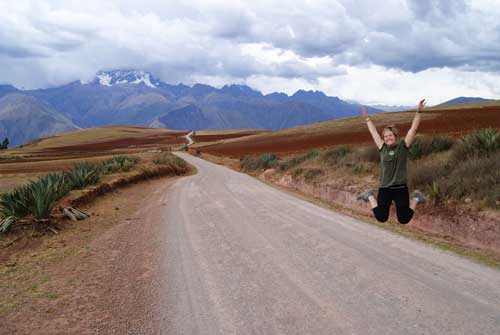