Is there a reason you picked Dublin?

Two. First, I don’t speak enough Spanish to be in one of the South American programs (laughs) Also I’d never been outside the country before, except for Mexico. Since my family is part Irish, it seemed like a good place for my first international experience.

Was your family supportive?

They were a little hesitant at first, but later they got fully on board. Which surprised me; they’re more reserved-type parents, especially with me, since I’m their last child. They just asked, “Please communicate with us while you’re over there.” 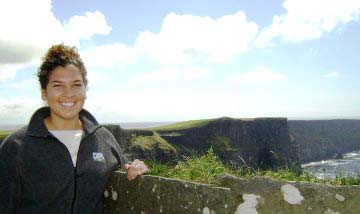 And did you – were you a good last child?

I did, I was! I emailed my parents almost every day, and we’d Skype on weekends sometimes. They loved it.

What was your first impression of Ireland?

Well, I’m from Arizona, where nothing is green. And here you land and everything is lush and so green. But the first thing I noticed was that the clouds are a lot closer to the ground than in Arizona, so right away I thought, wow, this is going to be really different. (Laughs.)

Tell me about your host family.

I was living with a woman who has two sons in their twenties, one still lived at home. They were all great, I became a part of their family. As soon as I got to the house, the host mother made me a cup of tea, and since I didn’t have jet lag yet, she said, “Want to go to the beach?” It was sunny and she said, “We have to take advantage, this is not normal in Ireland!” I didn’t really get what she meant until after my first week, which was cloudy and rainy all the time. So that first day we took the dog for a walk on the beach, and talked, got to know each other and it was great.

Totally. That first weekend before my internship started, they showed me how to take the train into town, and showed me where I’ll be working, showed me around Dublin, told me where to go, and places where NOT to go by myself. Really gave me the lay of the land.

So for other Dublin interns, you’d recommend a home stay? 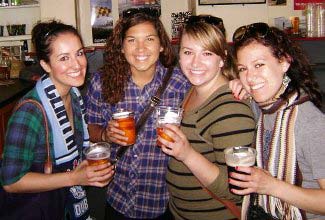 Oh, yes absolutely. Some of the other interns stayed in a residency dorm, but that wasn’t nearly as comfortable as staying with a family. I had this nice house, and the support of my host mother and her sons, and it was just so much nicer, and such a great experience. If I were to do another internship, I’d definitely pick home stay.

Did make lasting friendships, do you think?

Oh, yes, I keep in touch almost everyone. I still email with one of my host mother’s sons that I lived with, and I’m in touch with the other interns.

Describe the first day of your internship.

I met with my supervisor, who’s one of the partners in the firm, and he introduced me around and showed me their 3-story office, where you run up and down stairs all the time. Later he put four cases on my desk to read up on and says, “This is how we write up our cases, this is how we write our memos. Soon you’ll be writing memos yourself to update the cases.” I thought, ‘Whoa. O.K.’ The next day another intern took me to all the places we’d work with around the city– the judicial buildings, courts, various bureaus, other law offices, places like that. We walked everywhere.

What did you do as part of your internship?

What didn’t I do! I had documents notarized, got to write up subpoenas, sit in on a case in family court from start to finish; I was writing case memos, I had to look up and pick up death and birth certificates, pretty much everything that a trainee lawyer would do. I really liked the responsibility. Sometimes it was overwhelming since I hadn’t done those things before, but the work really set the tone for how things are done in an office, and what I can expect if I want to pursue law in the future.

Do you think the internship will help you down the road?

Definitely, especially the international aspect. I think having worked in Ireland will really give me an advantage, set me apart from other job seekers. There aren’t a lot of people in law with international experience.

What did you wear to work each day?

In the office, it was professional dress. The temperature in Dublin in summer time was usually upper 50-60’s, so for me that meant “winter” wear. I usually wore nice slacks, a button-down long sleeved shirt or a light sweater, and a jacket. To court, I’d wear a business attire dress with tights and flats, but a lot of the women lawyers wore heels. They’d wear athletic shoes on the subway, but heels in court. The guy interns would wear dress pants and a button-down dress shirt with a tie, sometimes a blazer.The lawyers wore suits, but the interns were fine with a tie and a blazer.

Keep an open mind, don’t go in with certain expectations because it IS a different legal system. I’d advise you work hard. Treat it seriously but also learn when to call it a day, because it can be stressful. Remember that the people you work for can later write letters of recommendations and really help you move along the law track. On a personal note, I recommend you bring comfortable shoes. You will be walking a LOT, you’ll be on your feet all day.

What did you do on weekends?

Honestly, I was usually exhausted by the weekend. I just wanted to hang out, watch movies, go to a pub on Saturday night and otherwise do nothing.

You sound like a law student already. Did you travel much?

I did some trips – I went to Galway, Wicklow and a small beach town called Howth. Youghal. Some of the other interns traveled outside the country, to Scotland and Amsterdam. But I stayed in Ireland for the full six weeks. Plus Dublin is such a great place, I didn’t want to leave.

Did you miss anything from home?

Must have been nice to get back to the Arizona sun.

It was and it wasn’t. When I left Dublin it was raining and 57 degrees; I land in Arizona, the sun is setting, and it’s 112. I said to my dad, “I don’t want to go outside. It was gross just getting off the plane. Can I just turn around and go back?” It took a week for my body to get used to the heat again.

Any reverse culture shock when you got home?

It was mostly (strange) to hear everyone speaking with an American accent, not an Irish accent. The day-to-day lingo is pretty different here. But otherwise it was OK. And I was able to eat real Mexican food. I was very happy about that.