“My field in grad school is infectious diseases,” Stephanie explains. “So I wanted to intern in South Africa since there’s a lot of tuberculosis and HIV there.”

As it happened, Stephanie ended up studying something else altogether. When ELI Abroad offered her an opportunity to work with a Public Health professor researching South Africa’s maternal mortality rate, Stephanie jumped at the chance.

“I helped with some of the research, entered data into a statistical analysis program, and even wrote parts of the paper, which will be presented at a professional conference and eventually published.”

The work may also appear in Stephanie’s own Master’s Thesis, something she’s now completing as she prepares for med school interviews.

The internship wasn’t without its adventures. During Stephanie’s stay, students at the University of Western Cape, where she was working, rioted in protest against steep tuition increases.

“So the professor would email me and say, ‘don’t come to campus today.’ We’d meet at a library, or her home instead.”

Still, the two formed a friendship that was as personal as it was professional. Toward the end of her stay, her supervisor invited Stephanie for a traditional home-cooked African meal, a major highlight.

“As much as I got out of the internship professionally, the whole cultural experience proved so much more valuable to me. It was incredible to be so immersed in Cape Town. Very humbling and eye-opening.”

Stephanie recalls walking through solid middle- and upper-middle class communities across the street from “townships so poor there’s no running water.”

Poverty in Cape Town means anywhere you go, you’ll be approached for money or food, sometimes somewhat belligerently. The possibility of being pickpocketed, or worse, is very real.

“I never felt my life was in danger,” Stephanie says. “But I was forced to be very, very alert to what was going on around me.” While she wasn’t mugged, one of her housemates was robbed after withdrawing money from an ATM.

“The thieves don’t mean you harm. They’re desperately poor and they just want what you have.”

Although always cautious, and never alone at night in Cape Town, Stephanie loved the city, its cultural richness, diversity, excitement and excellent food.

“The exchange rate is very favorable to the U.S. dollar. Which means you can really have a good time!” she laughs. “I had some amazing filet mignon for $10.”

She lived in a gated, secure group home with a diverse group of young people, including Dutch, German, French and Colombian interns. Stephanie often went out with them to explore the city, although she freely admits her favorite attraction in Cape Town may have been Boulders Beach, with its colony of African penguins.

On weekends and holidays, Stephanie -- and her housemates -- hit the road.

“They did the very popular Garden Route. That sounded amazing, but I had other plans.” 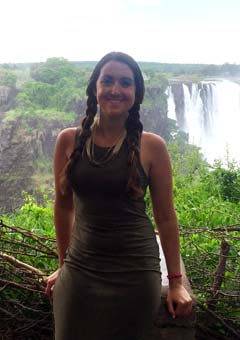 Instead, Stephanie fulfilled two lifelong dreams: seeing Victoria Falls in Zimbabwe (“mindblowing”) and going on a safari at Botswana’s famed Chobe National Park (“I saw tons of hippos, crocodiles, impala and herds of magnificent African elephants, the biggest land mammal on earth.”) To say the trips were amazing is an understatement.

In fact, the entire African experience has been an inspiration.

Med schools, are you listening? Admit this passionate candidate!