A Career-Changing Internship in Ireland

It’s the beauty of internships: sometimes they can open your eyes to a whole new path. For Danica, an art gallery internship 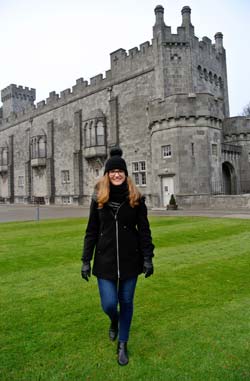 with ELI Abroad in Dublin was a pivotal starting point to a new career.

Danica studied history and art history at university in Toronto. Art is something of a family passion, her mom is an art teacher, and Danica enjoyed visiting museums and galleries in her previous extended stays in Europe.

“I made the decision to go to Ireland very quickly,” Danica recalls. “I applied with ELI in September, and left for Dublin in October… so I didn’t really have that much time to process my expectations. It just seemed like a good opportunity.”

Danica lived with a local family in Dublin and interned at an art gallery located in the heart of the city’s museum district., a few doors down from the National Gallery of Ireland and across the street from Trinity College.

“It was a little intimidating at first, because I’d never worked at a gallery,” she says. “And this one specialized in more modern pieces – most less than a hundred years old -- whereas I know the most about Renaissance and Baroque art. Also before this experience I had no background in Irish art, and could not have named a single Irish painter!”

To help her get acquainted with contemporary Irish art, the gallery managers gave her books, shared information, and encouraged her to explore Dublin’s intimate arts scene.

“They would recommend different exhibits, galleries and lectures. Really, they became mentors,” Danica says. “In many ways, the two women who managed the gallery treated me like a daughter, and I very much keep in touch with them today.”

It was both a social and a learning experience.

“Before I got to Ireland, I didn’t really think of it as being central to the art world, not in the way that somewhere like Paris or Rome or England are. But in fact there’s a lot to see there. There were so many museums, and cultural heritage sites to explore- and most were free to the public which was so great! Dublin is a city steeped in a long history of the arts. And because Dublin is so much smaller than a big city like London, the arts community there is very tight, supportive and collaborative.”

In the two and a half months Danica worked there, her gallery organized two large exhibits, which allowed Danica to observe, and take part in, the gallery research, cataloguing process and event planning. She was exposed to the active network of curators, specialists and art dealers involved large exhibitions; she learned about specific artists, how to showcase their work and how to handle different materials. One especially illuminating opportunity was to observe a large-scale art auction, where some pieces sold for as much as 200,000 euros.

“I went to Dublin thinking I wanted to work more on the curator side of the museum world,” she says. “But soon I discovered

that I most enjoyed the business of the art world. I went from an art historian focus, to an arts management focus. That surprised me, and it was really something new for me.”

Inspired, Danica applied to several Master’s programs in Europe. A manager at the gallery wrote a letter of recommendation one professor/ program director later described as “very impressive.” She got into all the programs she applied to thanks, in large part she believes, to the experience and connections she made at the gallery.

“My internship in Dublin came up in all my grad school interviews,” Danica says. “It was an instant attention grabber.”

Today, Danica is back in Toronto, working as an office manager for a company that also asked Danica to plan events and design a showroom/corporate exhibit room.

“They said, wow, you have these gallery skills, maybe you can help us with this, too.”

In September, she’ll return to Ireland to begin a Master’s program in Cultural Policy and Arts Management at University College Dublin.

“It’s like an intense MBA, for the arts” Danica says. “A one year program complete with a thesis.”

The work will be challenging, but Danica says, transition to life in Dublin won’t be.

“I know the city, I’ve traveled around Ireland, and I now have supportive contacts in Dublin. I know what to expect, and I’m very excited.”

Are you thinking about interning in Ireland?

“Just do it,” Danica laughs. “I took a leap of faith and it was a great decision. Thanks to the internship I know what I want to do, and how to get there. And Dublin is a great place to make friends. Irish people are so friendly and welcoming, you’ll feel right at home here.”